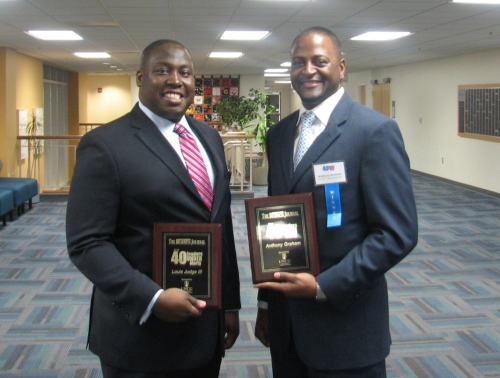 An advocate for young black men and an advocate for entrepreneurs are two young professionals at North Carolina Agricultural and Technical State University who have been recognized among the 2014 “40 Leaders Under 40” in the Piedmont Triad by The Business Journal.

Dr. Anthony Graham, chairman of the Department of Curriculum and Instruction, and Mr. Louis Judge III, the university’s director of technology transfer, received their awards February 20.

Dr. Graham is a professor whose work in the classroom benefits future and current teachers and whose research and engagement in the Greensboro community benefit the next generation of African American young men.

He has taught courses ranging from introductory education classes to graduate-level classes in learning theories, research and inquiry, and curriculum development. He also conducts workshops that prepare students for the Praxis certification exams.

Dr. Graham’s research focuses on African American adolescent students, particularly African American males and how the schooling process promotes or inhibits the construction of their academic and cultural identities.  He has published extensively in peer-reviewed journals and spoken at national and international conferences.

As director of technology transfer, Mr. Judge works with faculty members to identify research with commercial potential and bring it to the marketplace. He is responsible for negotiating licenses for university-owned intellectual property, developing business models for university startup companies, constructing the University’s intellectual property policies and procedures, and seeking commercial partners who can contribute to A&T’s research efforts.

He was named National MBA of the Year by the National Black MBA Association in 2013.

His career is highlighted by innovation and leadership at the university, in the community, and in the NBMBAA. Among his accomplishments are the creation of the NBMBAA’s annual jobs fair in Greensboro and the North Carolina NBMBAA mini-conference.

At N.C. A&T, Mr. Judge founded the Innovation Challenge, an annual, team-based competition in creativity and ingenuity for students.  The competition invites undergraduates to develop and present ideas for new products, services, or processes. Entries are judged on how innovative they are, the quality of presentation, and the practicality and benefits of the solution.

Before joining N.C. A&T in 2004, Mr. Judge was a technology innovation specialist with the National Aeronautics and Space Administration, where he improved the technology commercialization process in the Structures and Acoustics Division at the NASA Glenn Research Center.

Mr. Judge is a 2012 graduate of Leadership Greensboro and a 2013 member of the Guilford County Citizen Academy.  He serves on the boards of the N.C. A&T Center for Entrepreneurship, the East Market Street Merchants Association, the Jessa Maria Foundation, Just Plain Etiquette, and the N.C. Agricultural Biotech Strategic Projects Workgroup.

Mr. Judge was born in New York City and was raised in the Bronx and Gastonia, N.C.

This entry was posted in Best of the blog 2014, DORED, Faculty, News Media and tagged 40 Leaders Under 40, Anthony Graham, Louis Judge. Bookmark the permalink.