Econ students to get a new kind of help with math

Dr. Scott Simkins, director of the Academy for Teaching and Learning at N.C. A&T

For any student who has struggled with getting the math to come out right in economics courses, help is on the way from N.C. A&T.

Dr. Scott Simkins, director of the Academy for Teaching and Learning at N.C. A&T, has been awarded a National Science Foundation (NSF) grant of $247,901 to develop online tools that students can use to improve their math skills in economics courses.

The project, “The Math You Need, When You Need It: Modular Student Resources to Promote Successful Integration of Quantitative Concepts in Introductory Economics Courses,” is led by Simkins, with co-investigators Dr. Mark H. Maier of Glendale Community College, Glendale, California, and Dr. Jeffrey Sarbaum of the University of North Carolina at Greensboro.

This NSF grant is the fourth in a series that Dr. Simkins has been awarded since 2000, totaling more than $1 million.  Simkins and Maier have collaborated on each of the projects, which focus on the development, implementation, and sharing of innovations in economics.  Much of their work has focused on adapting teaching innovations originally developed in other disciplines for use in introductory economics courses.

END_OF_DOCUMENT_TOKEN_TO_BE_REPLACED 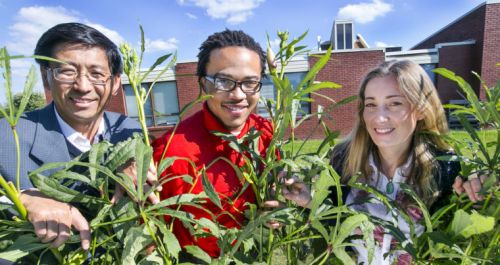 The Greensboro-High Point area was ranked second in a 2012 national report on food insecurity.  The county Health Department started looking for solutions and was joined by a church, a nonprofit, and a UNCG professor. When N.C. A&T joined the project, everything was in place to address at least one of Greensboro’s “food deserts.”

A&T had just created the first undergraduate program in the nation for urban and community horticulture, as well as a master’s degree program emphasizing sustainable agriculture. The administration was also encouraging more community involvement for faculty members and students.

“We want to produce quality students who can go and get started right away on practical projects,” [Dr. Guochen] Yang said. “We want them to be ready to solve real-world problems.”

The News & Record has excellent coverage of the project.

What: Media Coverage of Civil and Human Rights in 2013: Unfiltered and Unbiased? Two town-hall sessions sponsored by the Department of Journalism and Mass Communications.

Background: Many civil and human rights-related news events have occurred this year, including the U.S. Supreme Court decision striking down a key provision of the Voting Rights Act of 1965, the trial in the killing of Trayvon Martin, the 50th anniversaries of the Birmingham Bombing and the March on Washington, North Carolina’s Moral Mondays, and the continuing financial difficulties of the International Civil Rights Museum.

First session: Media Accuracy in Civil and Human Rights, 11 a.m.-12:15 p.m., to be held in the Television Studio, third floor. Speakers will include:

Sponsored by: The Department of Journalism and Mass Communication

Reception: A reception honoring Sandra Hughes, longtime local television journalist, will be held from 1:15–2 p.m. in Room 217. Hughes, who also teaches at A&T, is a recipient of this year’s Piedmont Triad National Conference for Community and Justice award and citation.

News 14 Carolina covered  the announcement of the Engineering Research Center collaborating with InCube Labs to commercialize its metallic biomaterials technology. 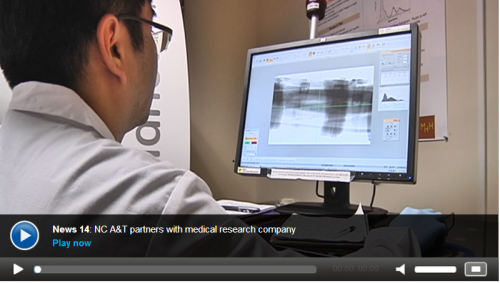 The Business Journal was all over that story as well.

“Scientists at N.C. A&T and ERC partners such as the University of Pittsburgh and University of Cincinnati are developing new materials, primarily magnesium alloys, designed to adapt to the human body and grow after implantation without having to be refitted, and then later safely absorbed into the bloodstream without ill effects. That could change the way that children born with birth defects, injured soldiers and others with major bone damage are treated.

“There are myriad possible uses for such materials, and the job of InCube Labs will be to identify which have the best potential to be translated into practical products quickly. InCube was founded by Mir Imran, a venture capitalist and entrepreneur who has founded more than 20 life-science companies and holds more than 200 patents.”

And the editorial page of The News & Observer in Raleigh published an editorial, “Huge grant spotlights how universities benefit state’s economy,” about the $54.6 million clinical and translational science project to be conducted by UNC-CH, A&T, and RTI International, and a similar award to Duke. They hope the awards send a message to North Carolina’s governor:

“Let’s hope those Republican legislators and Gov. Pat McCrory, who have made an issue of how universities should focus on training people for jobs instead of educating them in, say, arts and literature, take note of what’s going on here. Universities do train people for the workforce, but they’re also about ideas, about opening minds, about exploring new horizons.” 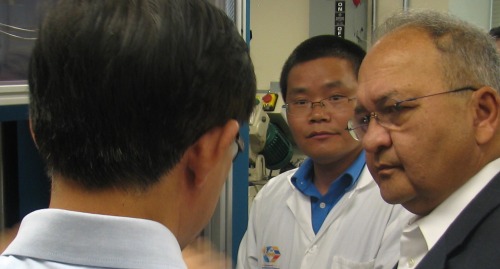 The NSF Engineering Center for Revolutionizing Metallic Biomaterials is introducing a significant new collaborator today.  Executives of InCube Labs of San Jose are at N.C. A&T  to sign an agreement to work together on bringing the ERC’s technology to the medical marketplace.

InCube takes basic biomedical technology and develops medical applications that physicians can use to improve patient outcomes. InCube has spun off more than 20 companies that produce implantable devices, drug delivery combinations, and interventional devices and use novel biomaterials. That background positions it well for implementing the ERC’s novel magnesium alloys and other technology for implantable, bioresorbable medical devices.

Significance of the agreement

“Translating knowledge from biomedical science into clinical applications has been compared to crossing a ‘valley of death’ because of the many issues that separate the scientist at the research bench from the M.D. at the bedside,” Esterowitz says.

“Forty years ago basic and clinical research were linked in institutions such as NIH. Medical research was largely done by physician-scientists who also treated patients. That changed with the explosion of molecular biology in the 1970s. Clinical and basic research started to separate, and biomedical research departments emerged as a new discipline.

END_OF_DOCUMENT_TOKEN_TO_BE_REPLACED

A&T, RTI to partner with UNC-CH on $54.6M project to advance clinical and translational science

The University of North Carolina at Chapel Hill has been awarded a five-year $54.6 million Clinical and Translational Science Award (CTSA) from the National Institutes of Health. With the award, UNC-CH will partner with two institutions, RTI International and North Carolina Agricultural and Technical State University, to accelerate the pace at which clinical and translational research directly benefits patients and communities in North Carolina.

The grant is NIH’s second to support the North Carolina Translational and Clinical Sciences (NC TraCS) Institute. The project is expanding to include RTI International as a research partner and N.C. A&T as a planning partner.

The partnership with A&T will give UNC researchers access to the state-of-the-art laboratories at the Joint School of Nanoscience and Nanoengineering, while providing NC A&T faculty collaborative opportunities and financial resources to accelerate discoveries in the lab to patients, particularly those from underrepresented minorities.

“Together, we will develop a robust pipeline of minority clinical and translational research scientists in a manner that can be a model for the nation,” said Barry L. Burks, N.C. A&T’s Vice Chancellor for Research and Economic Development.

The institutions will focus on three strategic initiatives:

END_OF_DOCUMENT_TOKEN_TO_BE_REPLACED 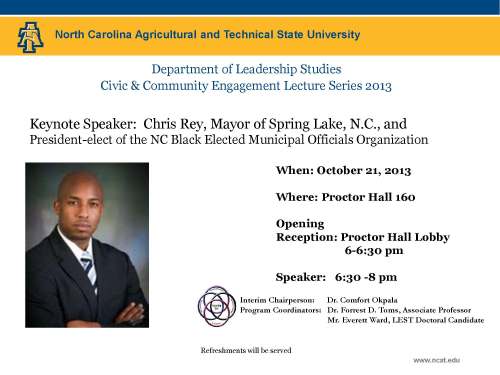 Chris V. Rey was elected mayor of Spring Lake in Cumberland County in 2011 at the age of 34.  He grew up in Spring Lake and attended East Carolina University.

In 2000, he enlisted in the U.S. Army as a computer information technology analyst.  Mr. Rey was commissioned a second lieutenant in the Signal Corps and was deployed to Iraq and Afghanistan. Among his military awards is the Bronze Star. After nearly eight years of active service, he was honorably discharged and earned a law degree from William & Mary School of Law, graduating in 2010.

In addition to serving as mayor of Spring Lake, Mr. Rey is a strategic planner and policy director for the Information Technology Division of the Virginia National Guard and holds the rank of major in the Virginia Army National Guard.  He also serves as president and CEO of The Rey Group, LLC, a consulting firm focused on business and strategy development for small businesses and non-profits.  He teaches  courses on constitutional law, criminal law, juvenile justice, and criminal courts in the criminal justice department at Mount Olive College.

Mr. Rey holds a B.S. in Business Administration from Walden University, and a Juris Doctor degree from William & Mary School of Law. He is married and has three children.

“The biggest impact on us is, there’s nobody at the federal agencies processing proposals. … There are 60 proposals we could have submitted in the first 10 days of October that are sitting on the desks here waiting to see what we should do.”

A good day to recognize A&T women in STEM fields

Dr. Svitlana Fialkova, post-doctoral researcher, at work in the nano-indentation lab of the Engineering Research Center at N.C. A&T

October 15 is Ada Lovelace Day, an international occasion to recognize women in the STEM disciplines.  At North Carolina A&T, that actually could take an entire day. There’s no shortage of female engineers, scientists, and role models here. Consider:

There you go — 15 women at A&T who are leaders in STEM fields. And their colleagues and students include many other female faculty members, post-docs, grad students, and undergraduates in STEM disciplines.

If you know any young women who want to go to college and study science, technology, engineering, or math, let them know there’s no reason they can’t be successful in their chosen field. And tell them North Carolina A&T is a great place for them to do it.