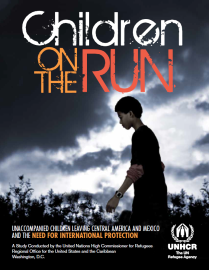 Since 2011, the United States has experienced a surge in the number of unaccompanied children coming from Central America’s Northern Triangle – El Salvador, Guatemala and Honduras – and Mexico. In fiscal 2013, there were more than 40,000. More than 21,000 came from the three Central American countries, compared to 4,000 in 2011.

With the cooperation of the United States, the United Nations High Commissioner for Refugees set out to learn why. The result was a report, released this month, “Children on the Run: Unaccompanied Children Leaving Central America and Mexico and the Need for International Protection.”

“While recognizing a significant contextual difference between the situation in Mexico and in the Northern Triangle of Central America, the common denominator is that all four countries are producing high numbers of unaccompanied and separated children seeking protection at the southern border of the United States,” the report says.

“UNHCR’s research was to ascertain the connection between the children’s stated reasons, the findings of recent studies on the increasing violence and insecurity in the region, and international protection needs.”

The project was a daunting one. To get a statistically meaningful sample, hundreds of children needed to be interviewed. Then the data from the interviews needed to be analyzed.

For help with that analysis, the U.N. agency consulted with Dr. Maura Busch Nsonwu of North Carolina Agricultural and Technical State University, an assistant professor of social work and interim director of the social work bachelor’s degree program in the Department of Sociology and Social Work.

Dr. Nsonwu has worked with the U.N.’s refugee agency on a number of projects over the past three years.  Her research focuses on refugees and human trafficking.  She had conducted qualitative studies, so she had the necessary expertise. But this study had two dimensions unlike anything she had encountered.

END_OF_DOCUMENT_TOKEN_TO_BE_REPLACED

Posted in Best of the blog 2014, Social & Behavioral Sciences