Speaker: Dr. Stephen Knisley, Professor of Bioengineering and Chairman of the Department of Chemical, Biological and Bioengineering, N.C. A&T

Abstract: Implanted metallic cardiac devices such as stents, pacing electrodes and abandoned leads exist in some patients. Since these are not attached to a defibrillating device, they have not been expected to impact on defibrillation. However, this investigator found that the probability of successful defibrillation increases by a statistically significant amount when certain nonattached metallic conductors are present in the cardiac electric field.

This effect, which is potentially advantageous, is thought to be due to stimulatory current at the interface between the conductor and the tissue.  In further research, the current was imaged using changes in transmittance of semi-transparent indium-tin-oxide (ITO) conductors.  X-ray diffraction confirmed that the image contrast mechanism was current-driven reduction of indium. The images indicated that current was highly concentrated near edges.

This was also predicted with a computer model having a nonlinear interfacial current-voltage relationship such as occurs for metal-saline interfaces. Cardiac optical mapping, which examines the spatiotemporal heart excitation process, further revealed that the edge of a nonattached conductor in an electric field produces excitation in rabbit heart. It was concluded that current occurs primarily at the edges of the conductor during a defibrillation shock, and this current is capable of exciting the heart. This can explain the effect of nonattached conductors on defibrillation.

The results imply that cardiac responses to defibrillation shocks are expected to be altered, and possibly improved, in patients who have nonattached metallic devices in their heart. 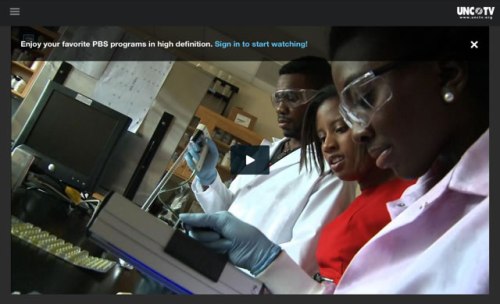 “To understand the depth of commitment that N.C. A&T has for science, technology, engineering, & math, you have to go back more than 150-years to when President Lincoln created land grant universities throughout the union. N.C. A&T is part of that legacy. Founded in 1890, A&T emphasized agriculture & mechanical arts. Today, they call it STEM, & its presence is apparent in every corner of the campus.”

Click here to see the report from “North Carolina Now.”