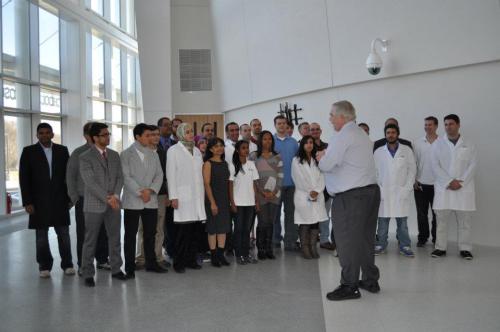 Dean Ryan fires up his students as they get ready to move into the Joint School of Nanoscience and Nanoengineering building on Friday. More photos are on the JSNN Facebook page.  For more photos of the building, see this photo album, also on the Facebook page. 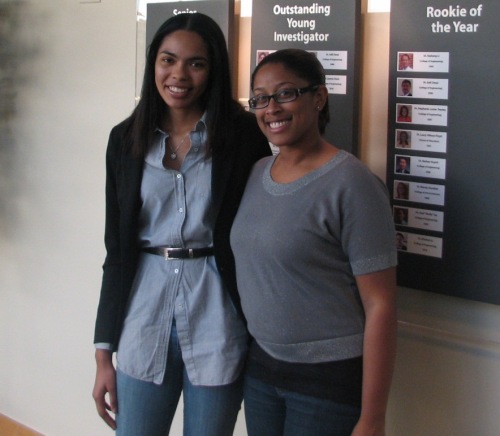 The hard work done by Felicia Lawrence and Celeste Paylor extends well beyond the classroom. The two N.C. A&T seniors have not only contributed to the success of the Office of Research Services as interns, they were also selected for two prestigious student leadership programs this semester.

Lawrence was selected to attend the Thurgood Marshall College Fund’s 11th Annual Leadership Institute and Recruitment Fair. Having successfully completed an intense interview process, she and other young leaders from historically black colleges and universities across the country attended a four-day workshop in New York City. The leadership institute featured a career fair and workshops on professional and personal development.  Lawrence is a senior journalism and mass communications major from Chicago.

Paylor was admitted to the fourth annual KeyBank Creativity and Leadership Symposium hosted by the Max M. Fisher College of Business at The Ohio State University in Columbus, Ohio. She had an opportunity to network with successful business executives and met other undergraduates who have experienced great academic success while studying business. The three-day program allowed her to work with faculty in the Fisher College of Business.  Paylor is a senior marketing major from Hillsborough, North Carolina.

“These students are excellent examples of N.C. A&T’s high-achieving students,” said Saundra Y. Evans, director of the Office of Research Services.  “They are bright, capable and conscientious.  They’re going to have great success after they graduate.”

Paylor is scheduled to graduate this month and has received several job offers. Lawrence will graduate in May 2012 and plans to attend graduate school to study international relations.

Posted in Off-topic but relevant